From Belgium to Communist Bulgaria and back to Belgium: obviously there existed no health and safety lobby that could prevent this reckless endeavor. “Le marathon de la Route” was another name of the Liège–Sofia–Liège long-distance rally organized by some clearly crazy Belgians. Eugen Böhringer won it for the first time in 1962 in his trusty 220SEb W111 sedan, adn he was determined to repeat this feat the following year. This time, however, things were not looking good.

Mercedes decided that Böhringer should tackle the 5,500 km rally in a totally new car, the W113 230SL two-seater, later to be known as the “Pagoda” due to the shape of its hardtop. The car, designed by Paul Bracq and with its unitary body engineering by Béla Barényi, was based on a shortened W111 chassis, incorporating the same crush zones which clearly were a novelty at the time. The competitors believed, almost unanimously, that Eugen Böhringer, the 1962 European Rally Champion, had lost his mind. 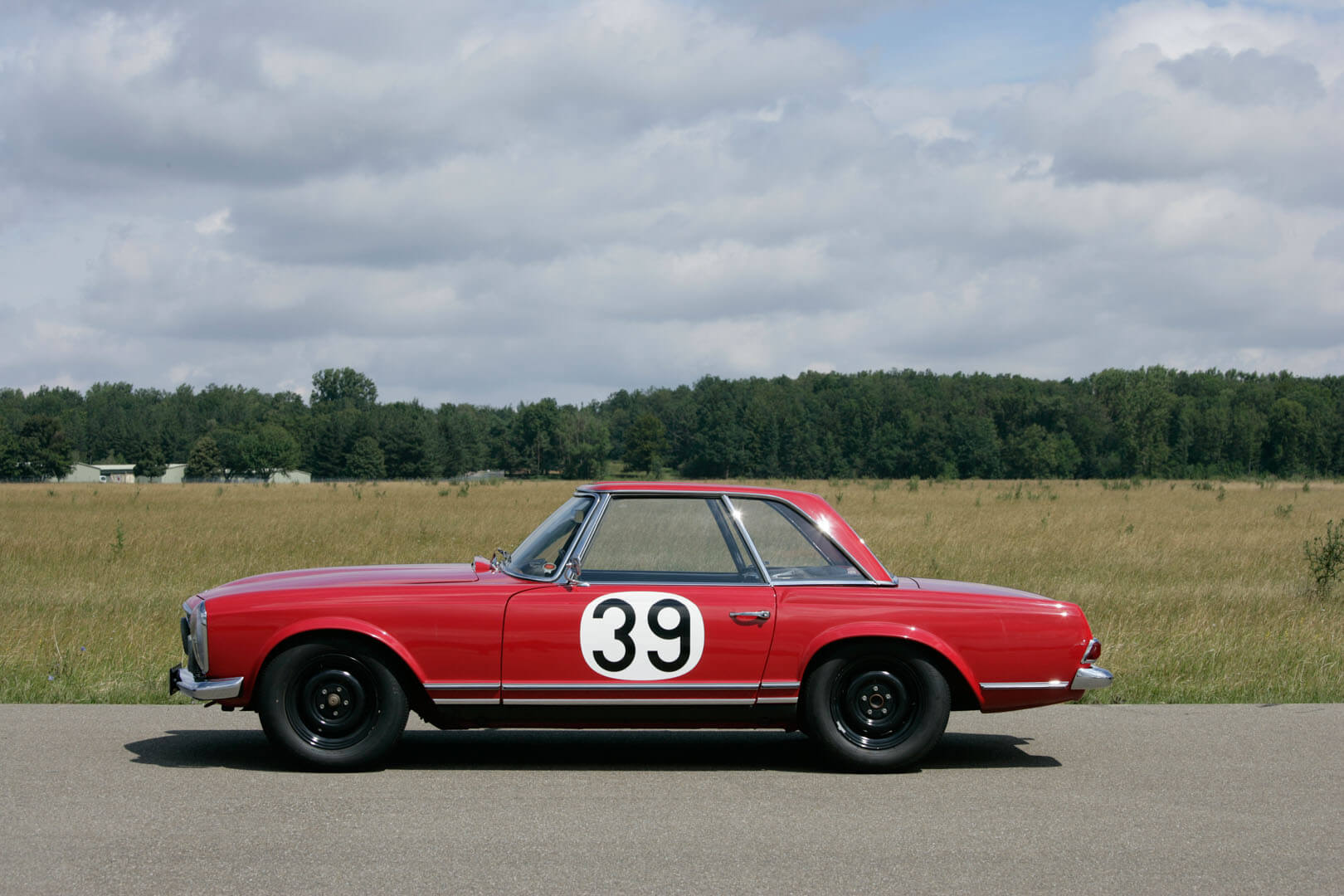 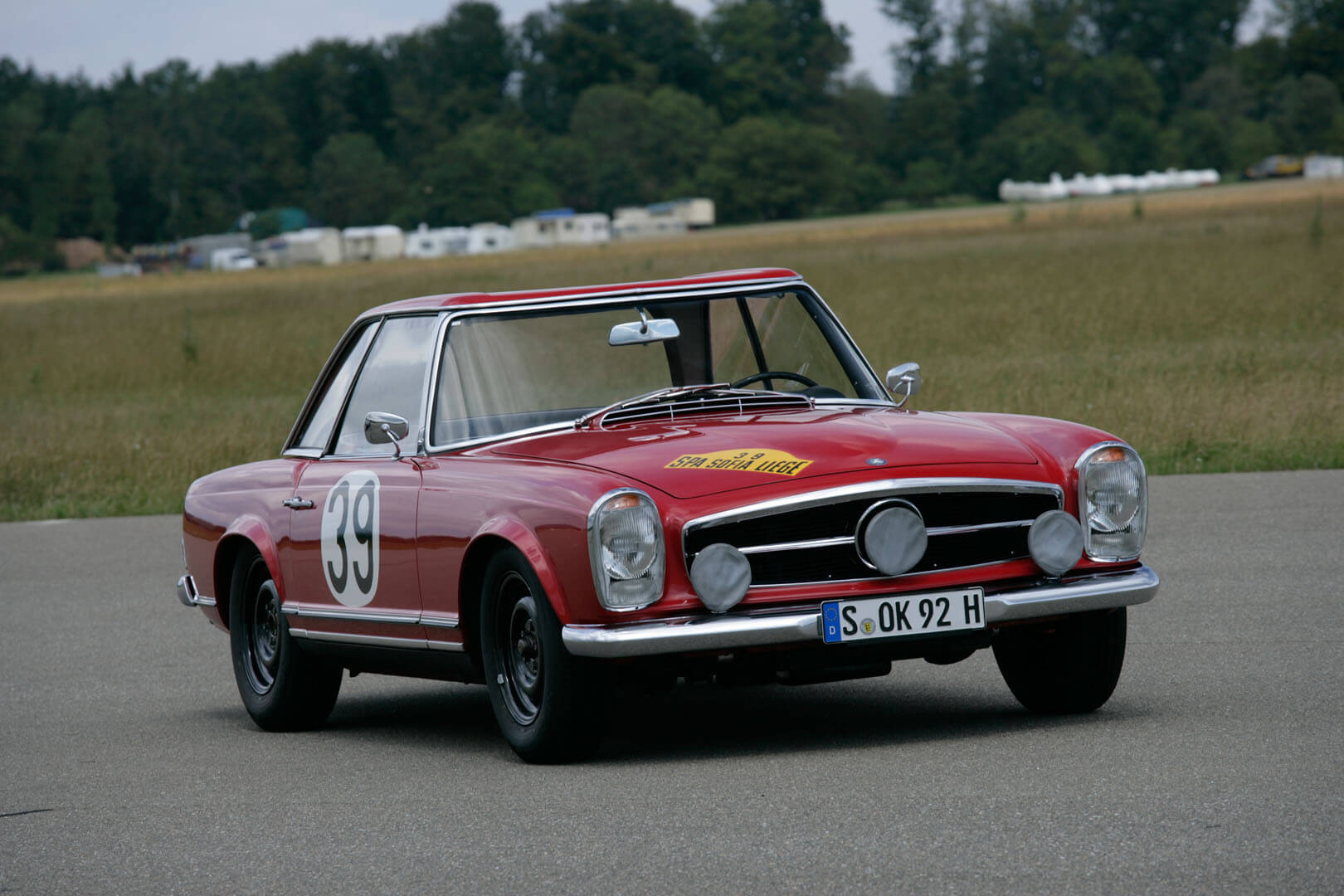 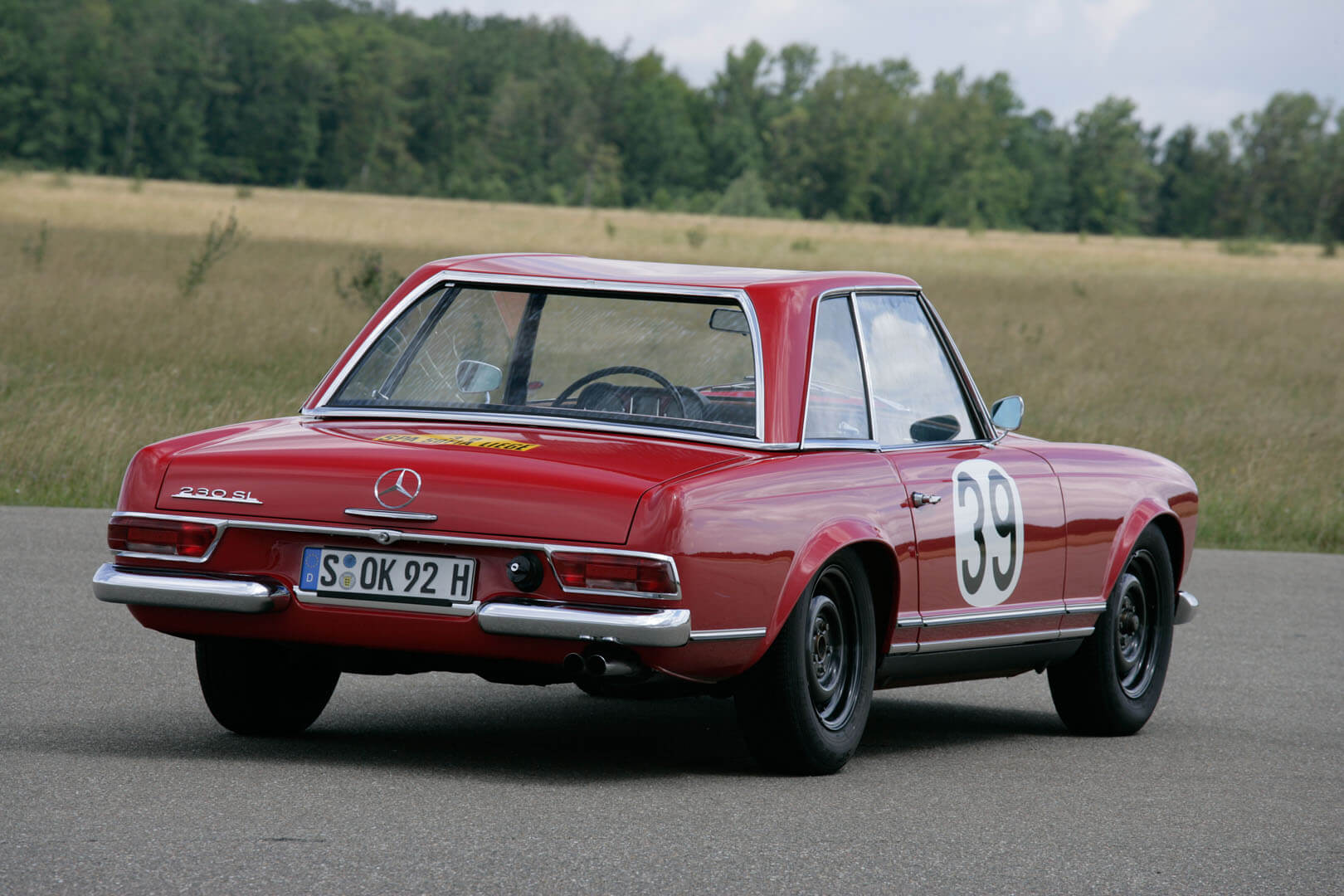 The car had just been presented at the Geneva Motor Show and was obviously untested in its production guise. Behind the scenes, the boffins at the Mercedes R & D Department, under the watchful eye of Erich Waxenberger, were performing the few permitted modifications os the car: the suspension was strengthened, a more voluminous fuel tank was installed, adn the engine capacity was enlarged from 2.3 liters to 2.6, bringing with it an additional 20 hp, for a total figure of 170 horsepower and a slightly increased torque figure, exact numbers unknown.

The British magazine “Autosport” said this of Böhringer’s chances: “As last year’s winner, Eugen Böhringer started among the favourites for the 1963 Marathon de la Route, but the fact that he was driving a new car, as yet untried in competition, did not particularly encourage his supporters.” Well, the hotelier, born in 1922, was bent on proving the doubters wrong. His car came from the pre-series, but the Swabian trusted the Mercedes-Benz technology, and, more importantly, he trusted Waxenberger. 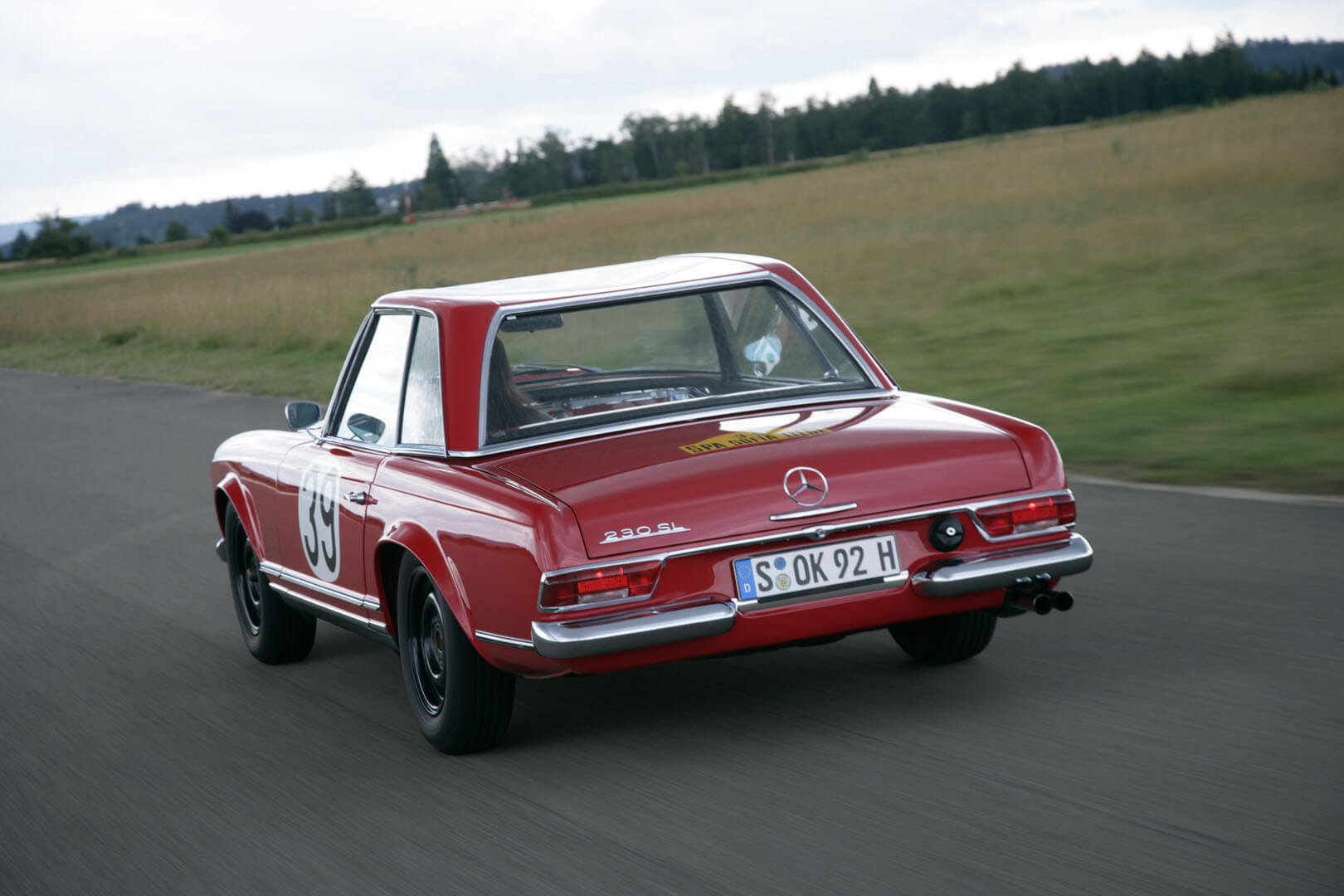 He was not unprepared, however. Together with his friend and codriver, Klaus Kaiser, a driving instructor and a foreman at a Mercedes factory, they spent 14 days recceing the rally route in a humble Ponton, equipped with a tent and an alcohol stove. Remember, this was in the midst of the Iron Curtain era, with the rally crossing Marshal Tito’s Yugoslavia, and visiting Communist Romania and Bulgaria. Eugen and Karl patiently logged the route and planned their assault on the Marathon.

The rally route led from Spa via Germany to Austria, Italy and Yugoslavia, and onwards to the Bulgarian capital, and later with a short respite in Romania, back via the Italian Alpine passes. Already in Dubrovnik Böhringer had a small accident which cost him no more than two minutes. “Autocar” magazine thus described the unfortunate incident: “Eugen Böhringer slightly reshaped the beautiful 230 SL but pressed on”. And he did. By Rovereto he had caught up with Rauno Aaltonen and Tony Ambrose in an Austin-Healey. Aaltonen and Ambrose left the road on the Vivione Pass, and Böhringer took the lead, never to relinquish it until the finish in Belgium. 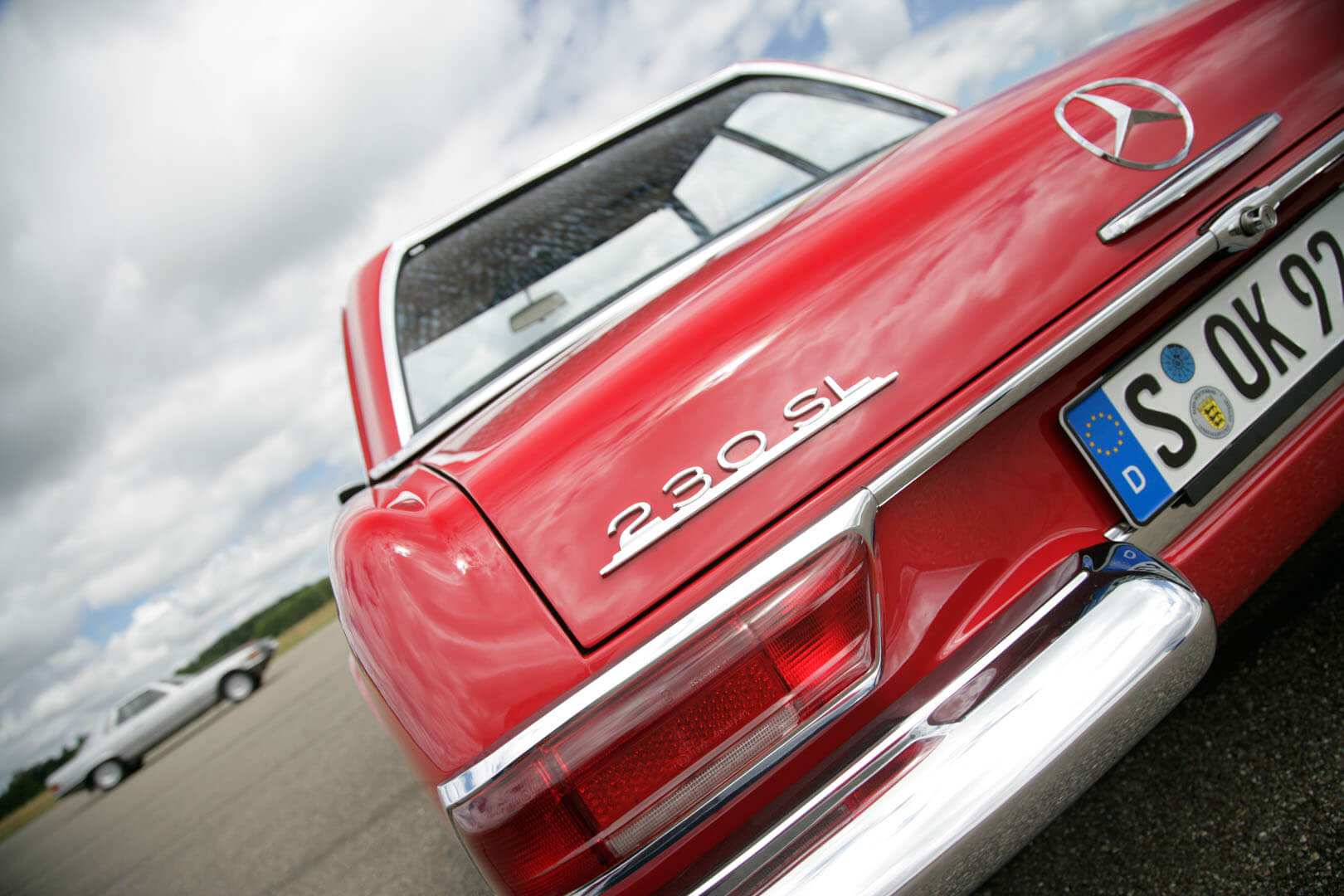 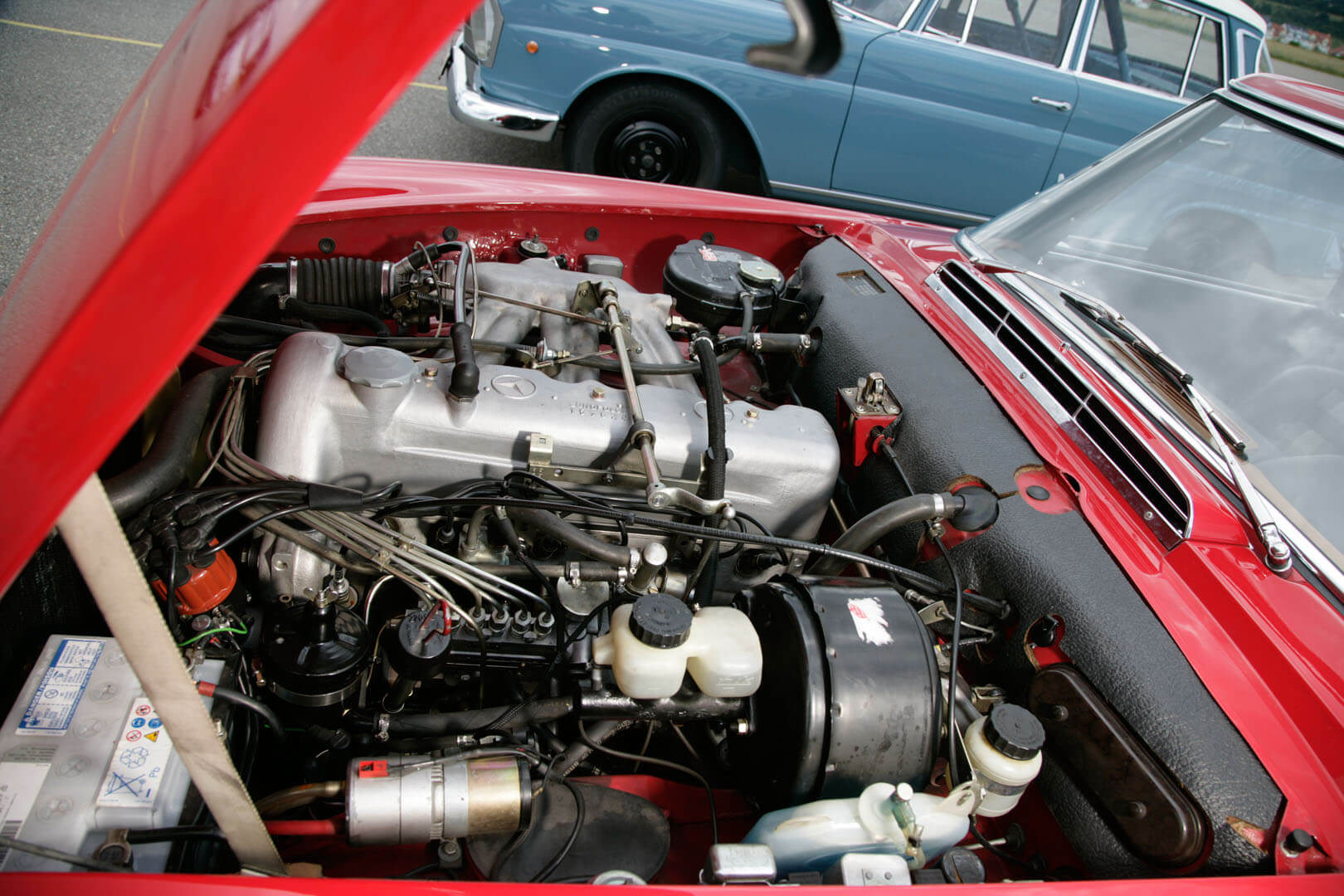 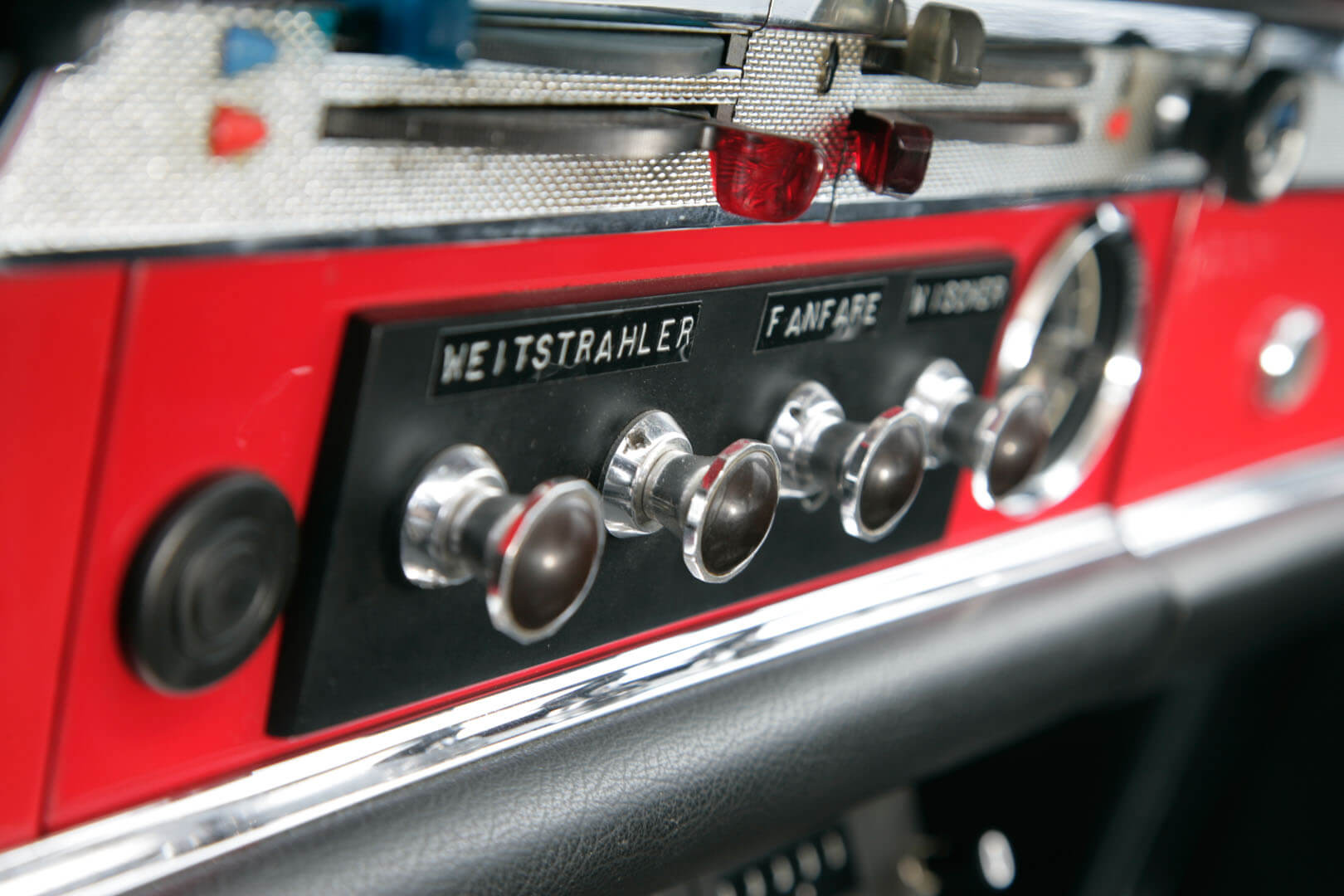 The attrition rate had been horrendous: out of 129 cars at the start only 20 reached the finish. officially spoken of as a tourist trip, the rally was in reality subject to a murderous tempo imposed by the rally authorities. In view of that, the result of Eugen Böhringer and Klaus Kaiser is all the more remarkable: in 5500 kilometers and 90 hours of driving they managed to collect only 8 minutes of time penalties! As “Autocar” commented, “The Royal Motor Union of Liège set a murderous pace for their classic event and Böhringer’s fabulous performance shook them rigid”.

The German periodical “Kristall” said in its report on the victory, published the following year, that “His competitors believed that he was constantly driving on the limit, always taking risks, demanding everything of himself, Klaus Kaiser and the Mercedes 230 SL”. Böhringer denied that and said that 80% of this kind of driving on public roads was subject to a risk calculation. “And the remaining 20%?”, demanded the interviewer, Rolf Winter. “That depends on circumstances”, replied Eugen with a chuckle. The following year he only managed third place at the same rally, but one must remember that in terms of proving the Mercedes quality and reliability to the outside world his achievement stands close to Sir Stirling’s on the Mille. 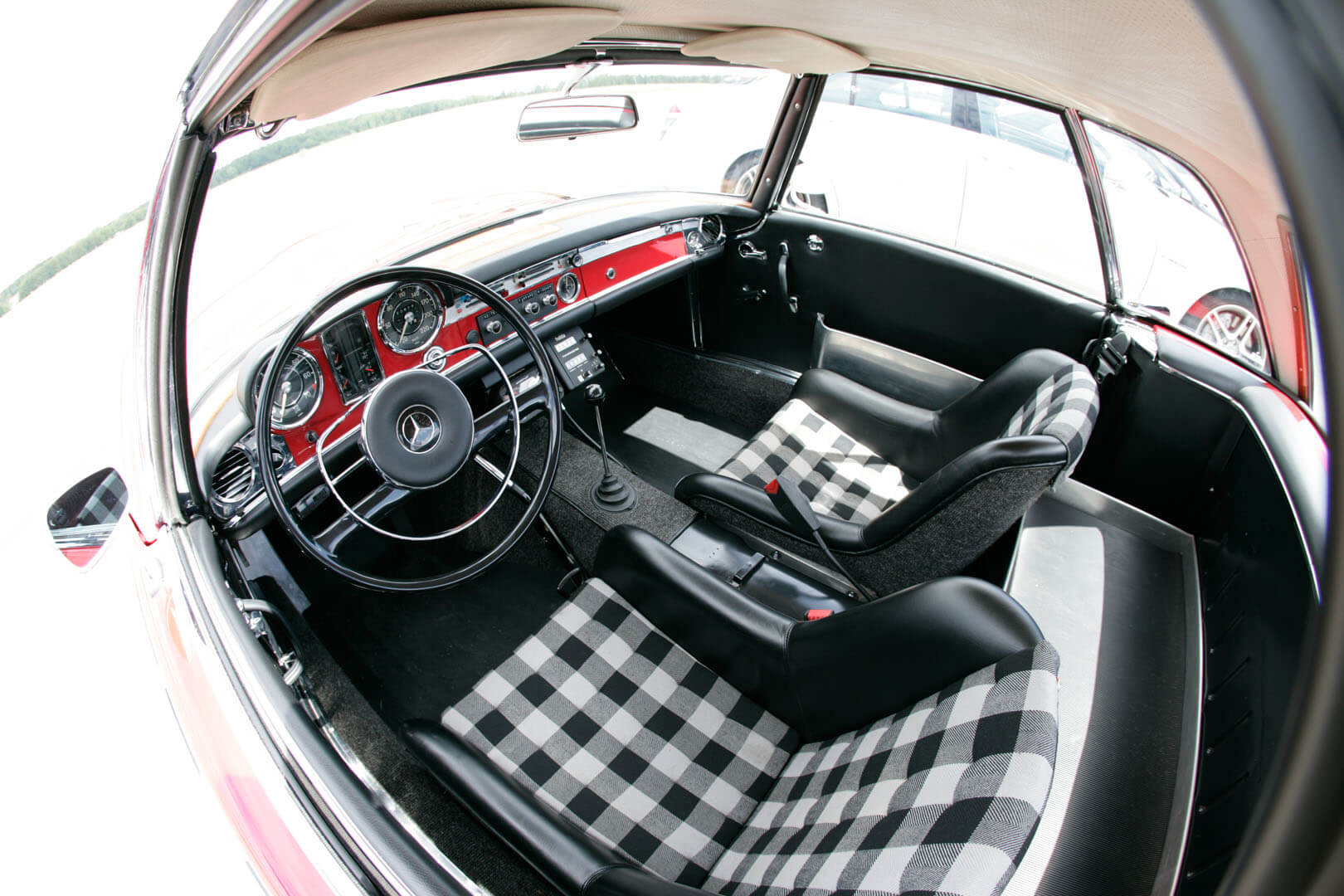 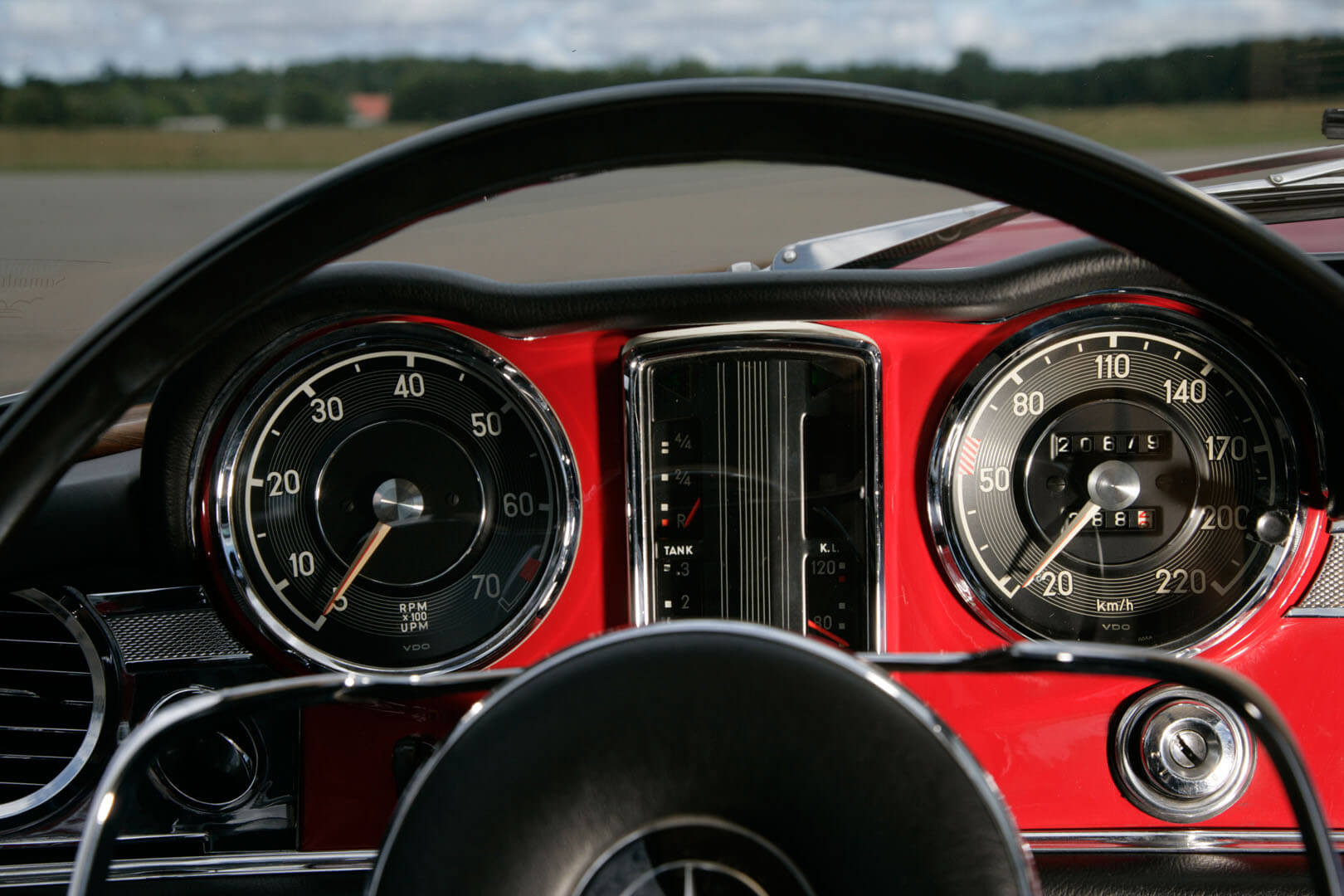 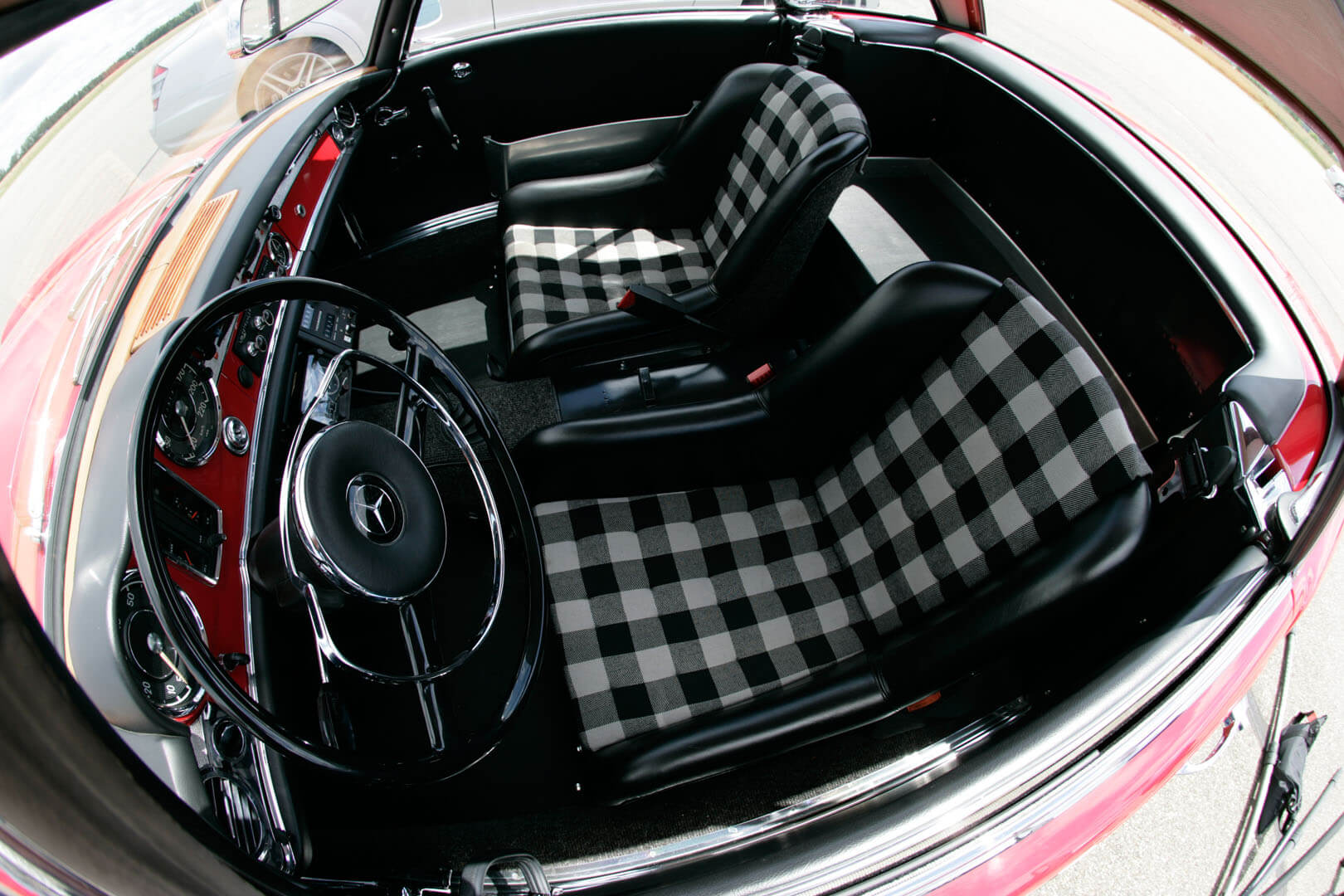 The jovial hotelier died in 2013 and I never managed to interview him, although I tried multiple times. Eugen Böhringer remains one of the least known people without whom Mercedes-Benz would never be the runaway export success that it became less than two decades after the end of World War Two. But I could drive his car. I was fortunate enough to drive the little red “Pagode” several times and became very familiar with it. The first thing you notice is the diminutive size. Compared to today’s city hatchbacks it is still tiny. However, inside it feels roomy and airy, with excellent visibility, aided by the elegant, thin pillars of the permanently attached hardtop. The peripheral vision is so good one wonders whether the old philosophy of preventing accidents by being able to see an imminent danger was really inferior to today’s practice of assuming an accident is inevitable adn armoring the car to cope with it.

Four days and nights in this car? Easy. First of all, the driving itself is a low-effort affair. The unassisted steering is never too heavy, and it loads up nicely in corners, providing enough feedback. Of course no Mercedes at that time had rack and pinion steering, as that was deemed too sensitive at speed on the Autobahn (it first appeared in 1995 in the W210 E-class). The brakes are efficient enough, easy to modulate, and the engine pulls obediently in all four gears. This car is not fast by today’s standards, but was plenty rapid in 1963. In fact its main asset is the breadth of its abilities: it can be hustled on gravel, on narrow mountain roads and it can stretch its legs on a long highway jaunt, precisely what was needed on the 5,500 km rally route. The very considerable suspension travel helps too, as well as the Pagoda’s superior ability to eradicate small shocks and to smooth the impact of bumps. In a stiffly sprung car Böhringer’s chances would be much lower, especially over the treacherous backroads of Eastern Europe. The Pagoda is ideally suited to today’s traffic, and never gets really exhausting like so many 1950’s Mercedes cars would do. Of course I have never driven it for four days and four nights running…

New Lagonda to Be Launched in Geneva