When the 964 version of the Porsche 911 appeared in late 1988, and although 85% of the car was virtually new, it still had the original body shape and was powered by an air-cooled flat-six engine positioned behind the rear axle. At the beginning the car was launched as the all-wheel-drive Carrera 4: at the time, AWD rally cars were all the rage, and the 959 already had shown the potential of delivering torque to all four wheels. The idea was that the AWD system would tame the difficult handling characteristics of the 911, making it accessible to more customers worldwide. The engine was installed in such a way that four-wheel drive was technically doable, except that the old-style torsion bar suspension was in the way. Therefore the entire chassis was redone completely by the team at Weissach, resulting in an arrangement with MacPherson struts in the front and semi-trailing arms with coil springs in the back. The whole floorpan was also newly designed, with new suspension attachment points.

At the time, the investment made in the 944 and 928 lines was not bringing any profit, and the 911 in its latest form had to save the Porsche company from extinction. However, the AWD system, with its 31:69 division of torque between the axles, was very complicated. It used the ABS sensors at each wheel to determine how to apportion torque. If one wanted to save some money and 80 kilograms, as of 1989 one could order a two-wheel drive Carrera 2. It was more agile, and it was possible to order it with the new Tiptronic automatic gearbox (which was unavailable with four-wheel drive).

Until 1993, the factory produced 18 219 Carrera 2 Coupes, 13 353 Carrera 4 Coupes, 16 517 Cabrios, 4 863 Targas (both the Cabrio and the Targa were available as Carrera 2 or 4), and 930 Speedsters, based on the Carrera 2. Today, Carrera 4 models and Tiptronic-equipped cars are generally cheaper than the others. The RS versions, Anniversary cars and the Turbo S have much higher prices, with the Turbo S having exceeded 1 million euros at an auction! 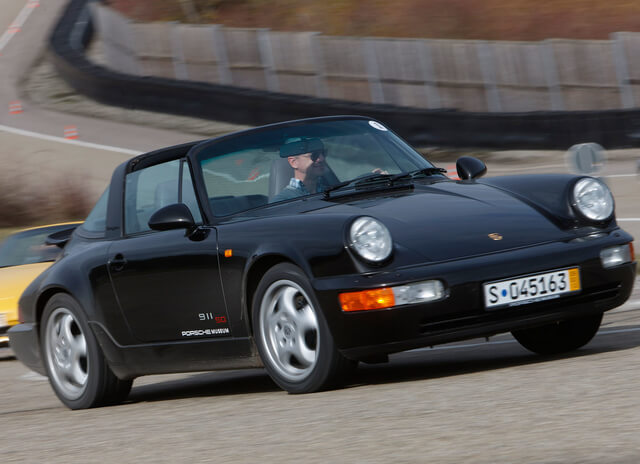 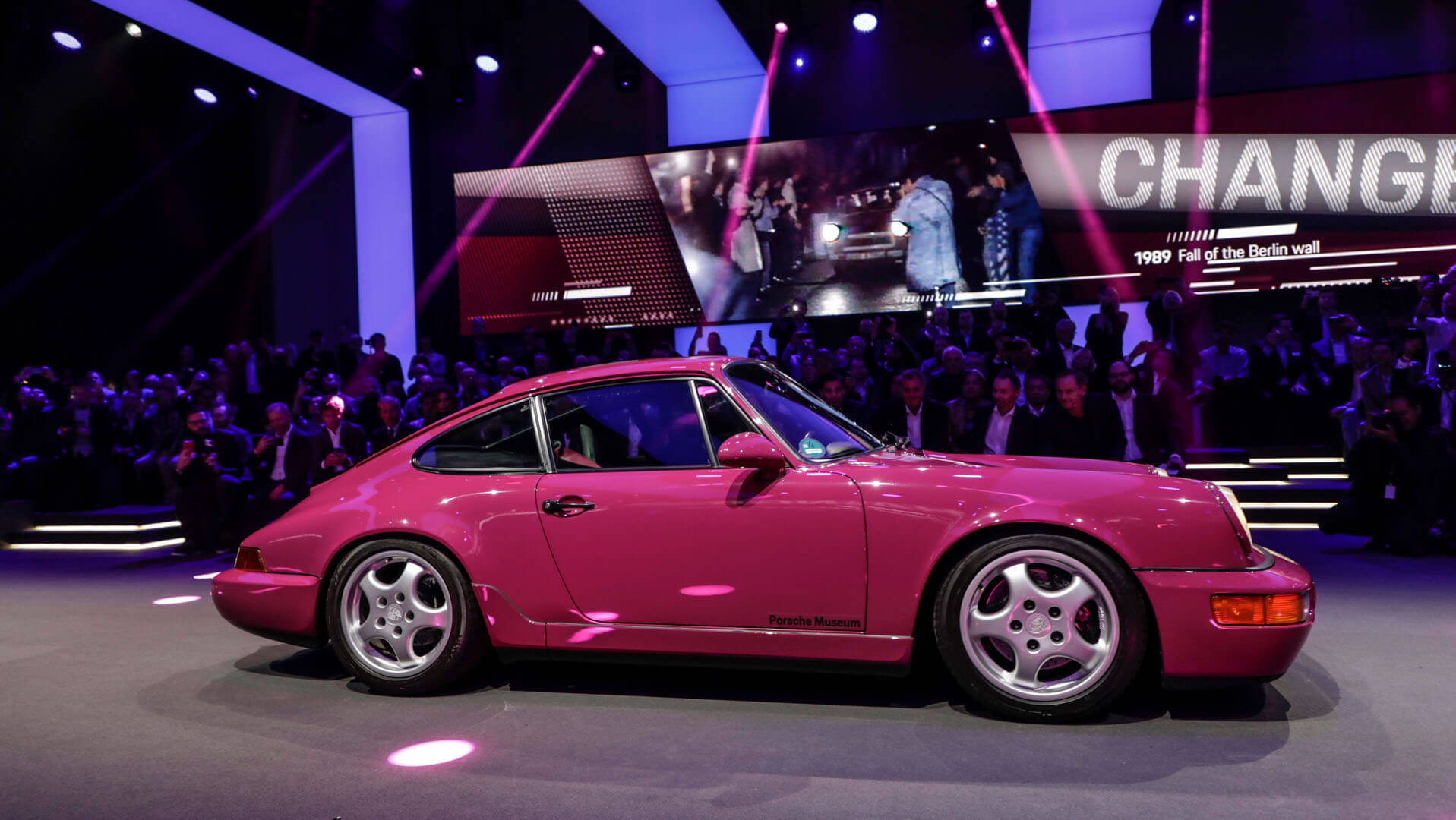 For the 964 the engine grew to 3.6 liters. Because it is not very heavily stressed, with proper maintenance it can reach 300,000 km until it needs a complete overhaul. Therefore you must demand invoices which prove that a regular and correct maintenance schedule has been adhered to. Valve clearances must be checked every 20,000 km, the double ignition distributor must be checked and the toothed belt replaced every 80,000 km or every 7 years. The cam drive chain sliders must be replaced every 150,000 km. The fuel pump relay can be defective, and the dry sump lubrication system can develop leaks.

Generally the drivetrain maintenance is very labor-intensive on the 964 due to the tight packaging of components. Don’t be surprised by the workshop bills. The manual gearbox is very strong. Avoid the Tiptronic, and not because it blunts the car’s performance, but because its electronics are prone to failure. Most, if not all, of the Japanese imports are Tiptronics: buy only when the rest of the car is really perfect, and you are terrible at gear shifting. 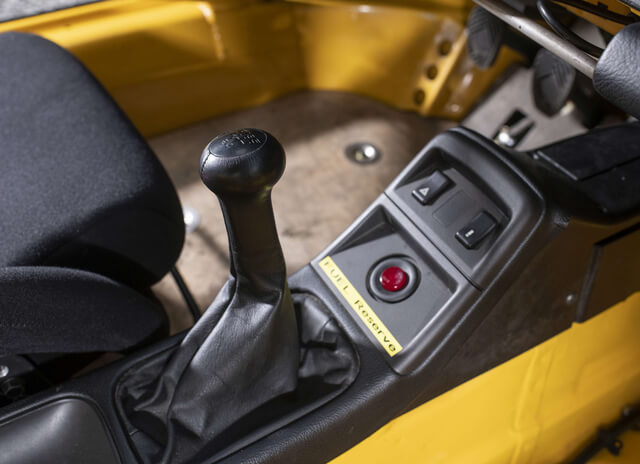 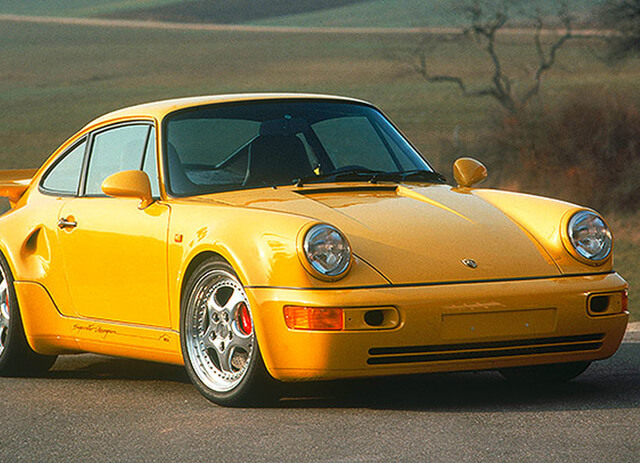 The car will only behave perfectly when the suspension is in ideal condition. The bushes, bearings and rod ends should be replaced recently, and have no play. Too many Porsche 964s in the market are shiny, visually desirable and riding on completely worn out suspension parts: avoid, or haggle. The all-wheel-drive hydraulics are generally unreliable and difficult to maintain. The AWD control unit and Tiptronic control unit electronics are extremely expensive, and they have a strong tendency to fail unexpectedly. 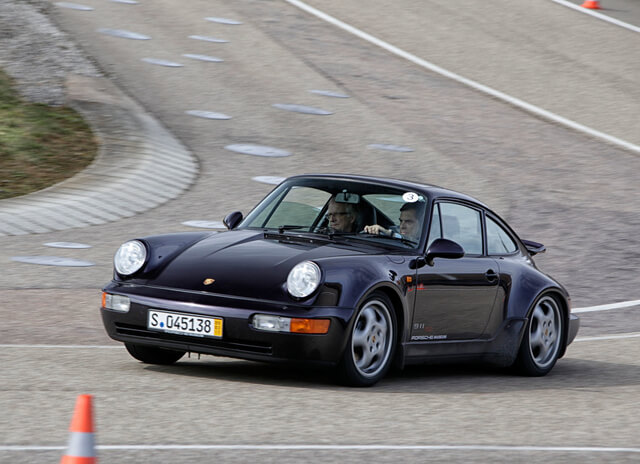 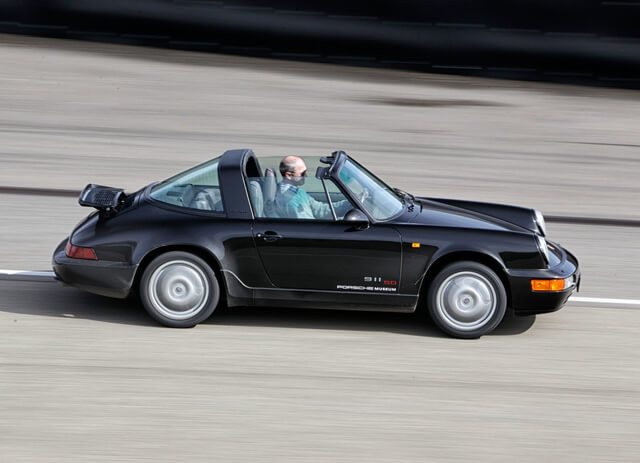 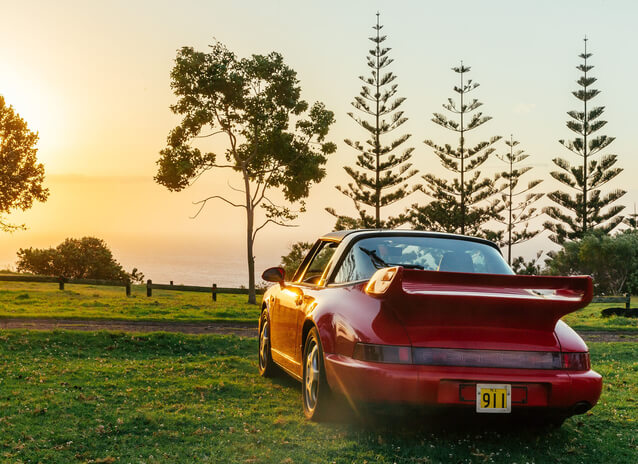 The body is fully zinc-coated, and really rusts only when unprofessional repairs have been performed due usually to accident damage. If you see any rust, walk away. Be suspicious of freshly resprayed cars. The typical hiding places for the tin worm are the large GRP bumpers, which often hide accident damage. 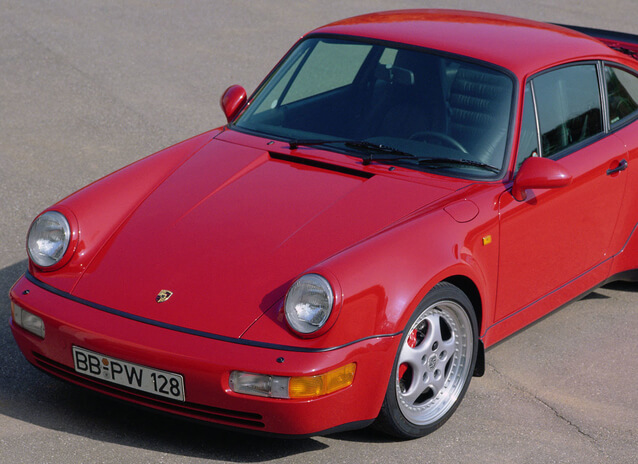 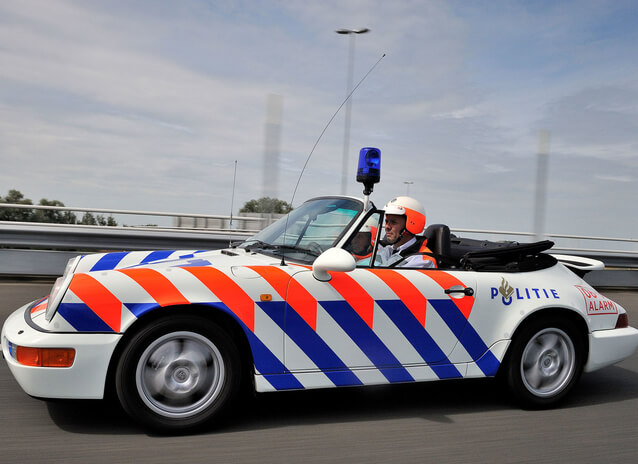 All parts are available, but never cheap. Look for interior wear (seat bolsters, pedals, steering wheel, handles, switches) which does not match the declared mileage. Find the best interior on the market in order to avoid costly repairs. 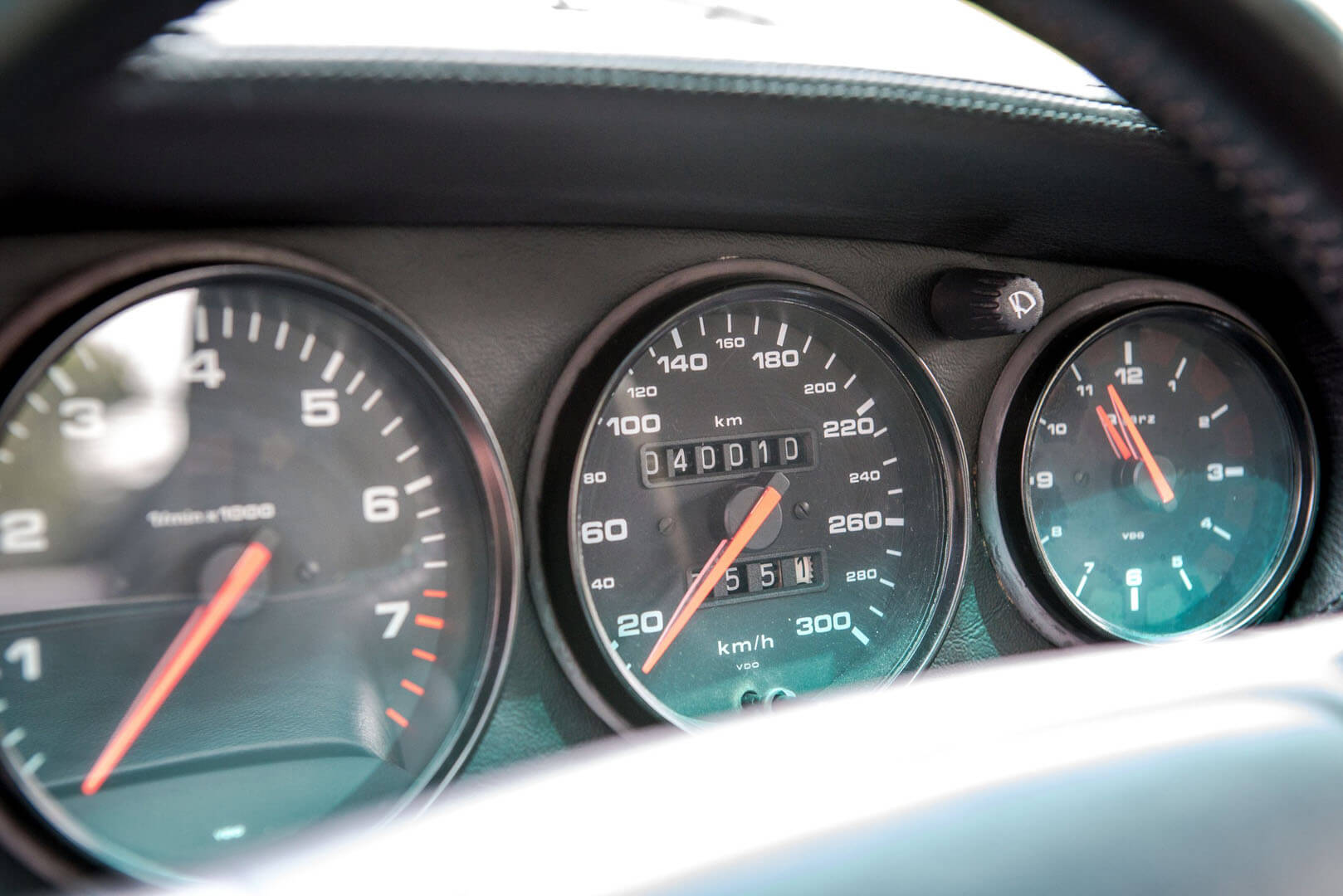 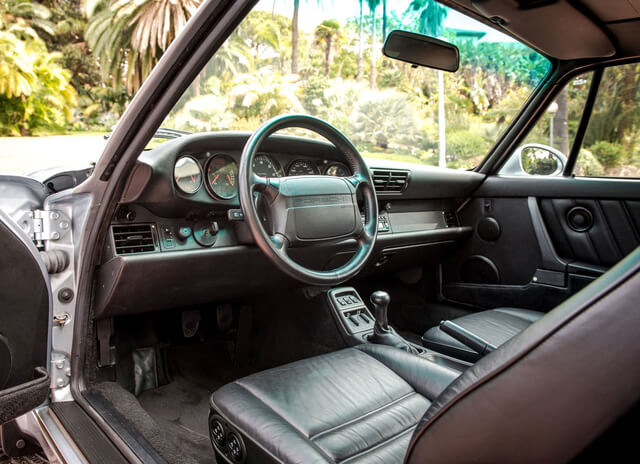 The 964 is very good to drive… for the period. Many of the now fashionable restomod cars are based on the 964, including Singers, but the later 993 is a much better drive due to its multilink rear suspension. Better and safer. That said, a healthy Carrera 2 can give the driver a lot of pleasure. The simplest is always the best, so go for a manual Coupe with rear-wheel drive… or the hellishly expensive RS, which is a work of art. The 964 is the first 911 with power steering (and ABS) and thus is definitely less demanding of its driver. You can drive it in heavy traffic, and take it to a race track. Your choice, and you can make this choice every day. Make sure only original Porsche spare parts have been installed in the car you wish to buy!