In a way the SLR was unlucky, being launched in 2004, at the same time as the Porsche Carrera GT and the Ferrari Enzo. But comparing it directly with those two cars is very wrong, and proves that the person performing the comparison has no idea what this very special car was trying to be. For McLaren it was the first road car in a while, and for Mercedes it was one of the two symbols of a newly opulent era, beside the Maybach.

The gullwing doors made the comparisons with the W198 inevitable, but in fact, to me, the SLR McLaren always owed more of its DNA to the so-called Uhlenhaut Coupe and the SSK/SSKL prewar sports cars designed by Ferdinand Porsche. Where other supercars screamed at high revs, the SLR was more about torque, a baritone exhaust note (through specially engineered side exhausts!) and effortless, contemptuous progress. It could be driven in a traffic jam, in city traffic and could be used to go shopping (but one had to check the height of multi-storey parking lots because of the doors!), but all the trick aerodynamics worked best when it was driven very, very fast. Apart from the Bugatti Veyron which is a much newer car, I don’t know any vehicle which can be more stable at 300 km/h on a public road. In Germany, of course.

The SLR was perfect in the dry, but even with the ESP fully engaged it could be a handful. In the wet, because of the wall of torque, it was downright scary, as a proper supercar should be. In third, on a wet road, with the front wheels pointing straight,it would try to step sideways, and sometimes it did that even in fifth gear. With the ESP off, it was unmanageable for most drivers.

The fuel consumption at normal permissible speeds was much lower than expected, due to the engine’s torque and supercharging. A figure of 10 l/100 km is attainable if speed limits are observed.

The Roadster is a fantastic creation, with a specially designed roof with a solid leading edge. Just as good to drive as the Coupe. The 722 model is the pick of the crop, with sharper reactions and still better aerodynamics. The Stirling Moss special edition is just a collector car, quite ugly and impractical. 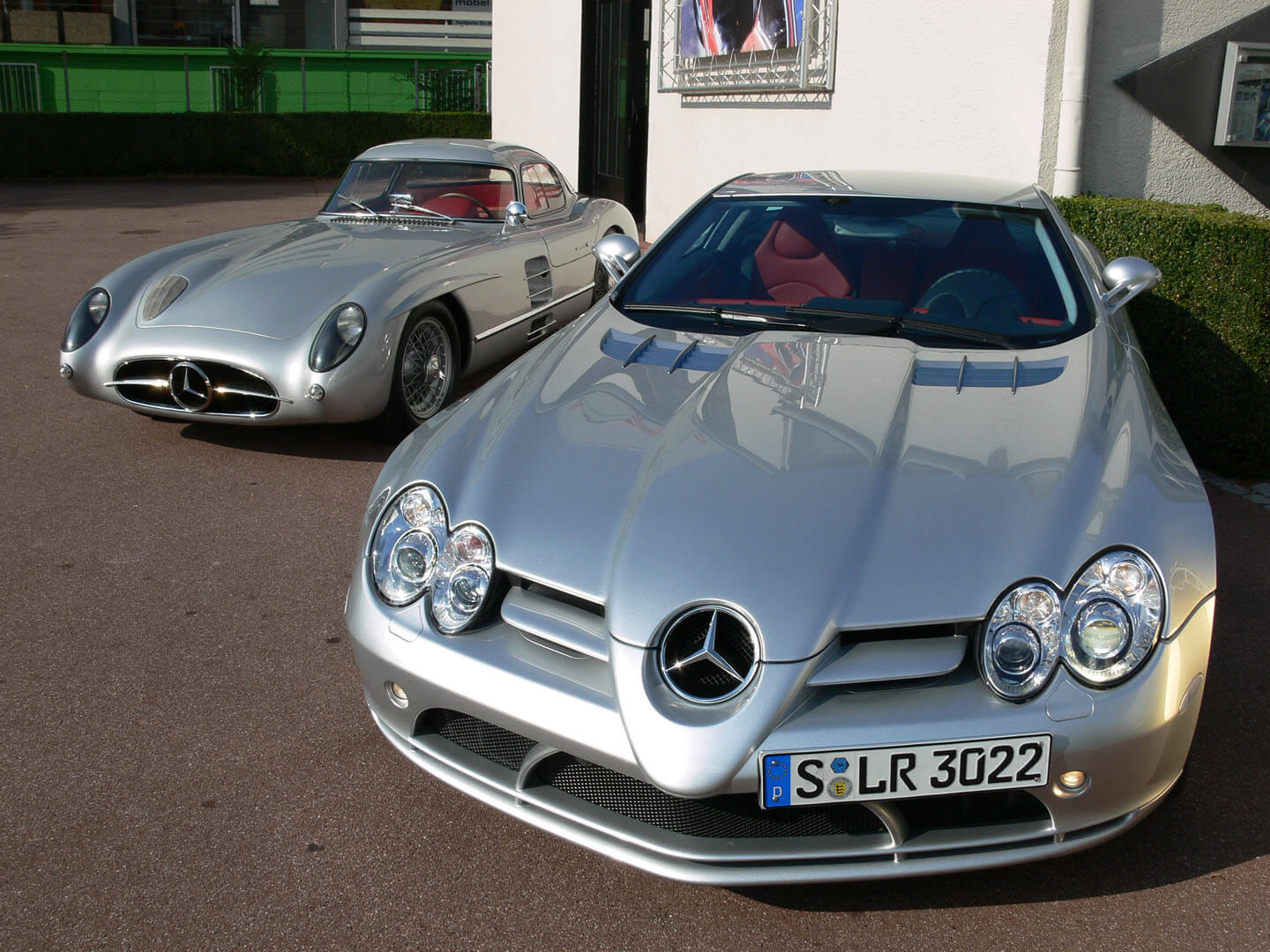 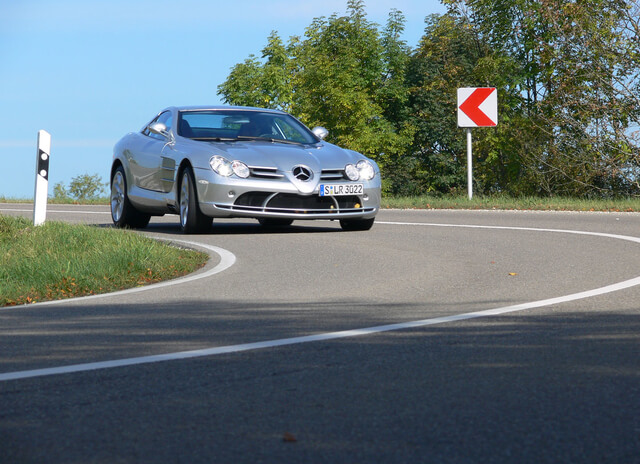 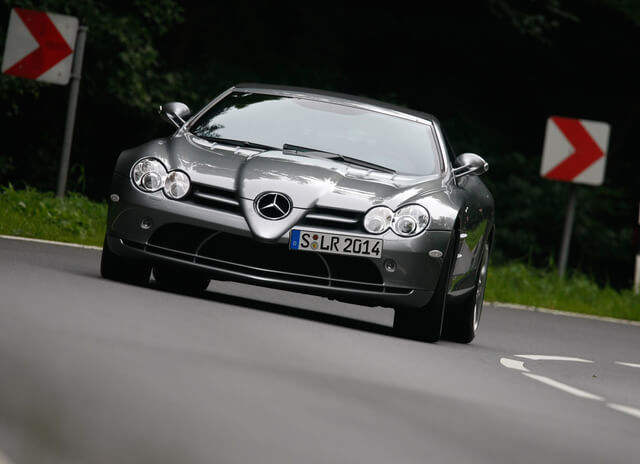 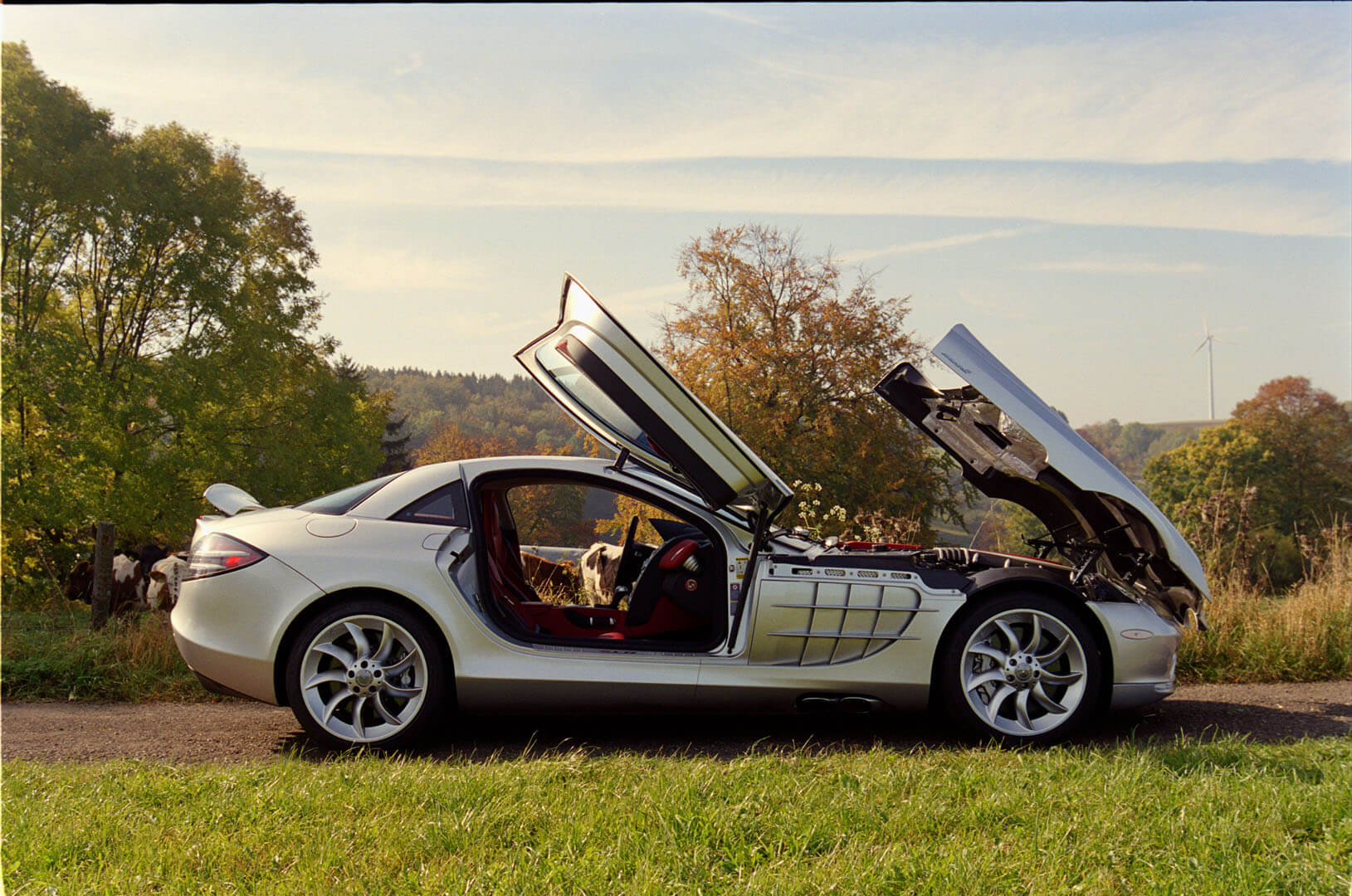 The supercharged M155 motor, fed air through the Mercedes star on the nose (the intake tract is completely straight, and generates some ram air effect), develops between 626 and 650 horsepower. It is a durable unit, which requires less maintenance than Italian engines, but still will suffer when neglected or left unused for long periods of time. Check the service history for gaps and demand all the recent invoices. 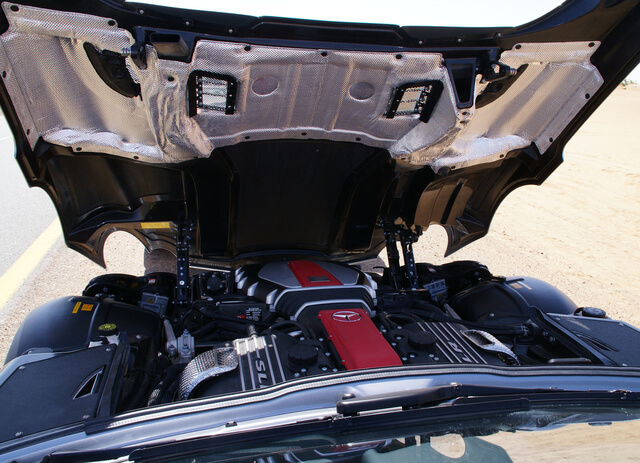 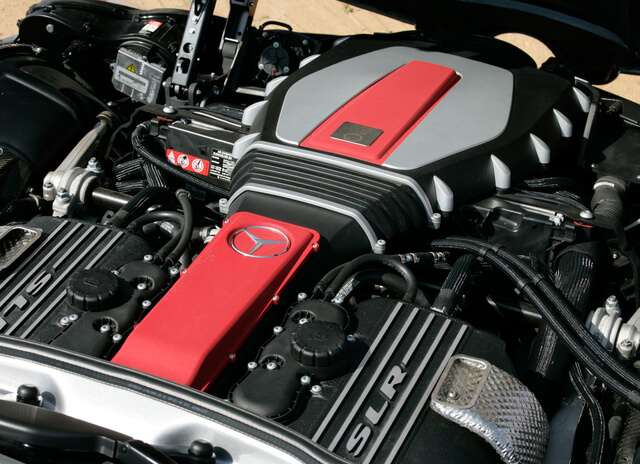 Lots of journalists, who never buy such cars, complained about the gearbox being slow and not sharp enough. Comparing it to a Ferrari F1 transmission was not entirely fair, as Mercedes installed in the car its venerable 5-speed torque converter automatic, capable of dealing with 1000 Nm of torque (the SLR engine developed over 800). One could shift gears automatically, or manually, but there was never any need to do so with haste: if you have so much torque, you just drive in a higher gear. The gearbox is very strong and with correct maintenance will last almost forever. 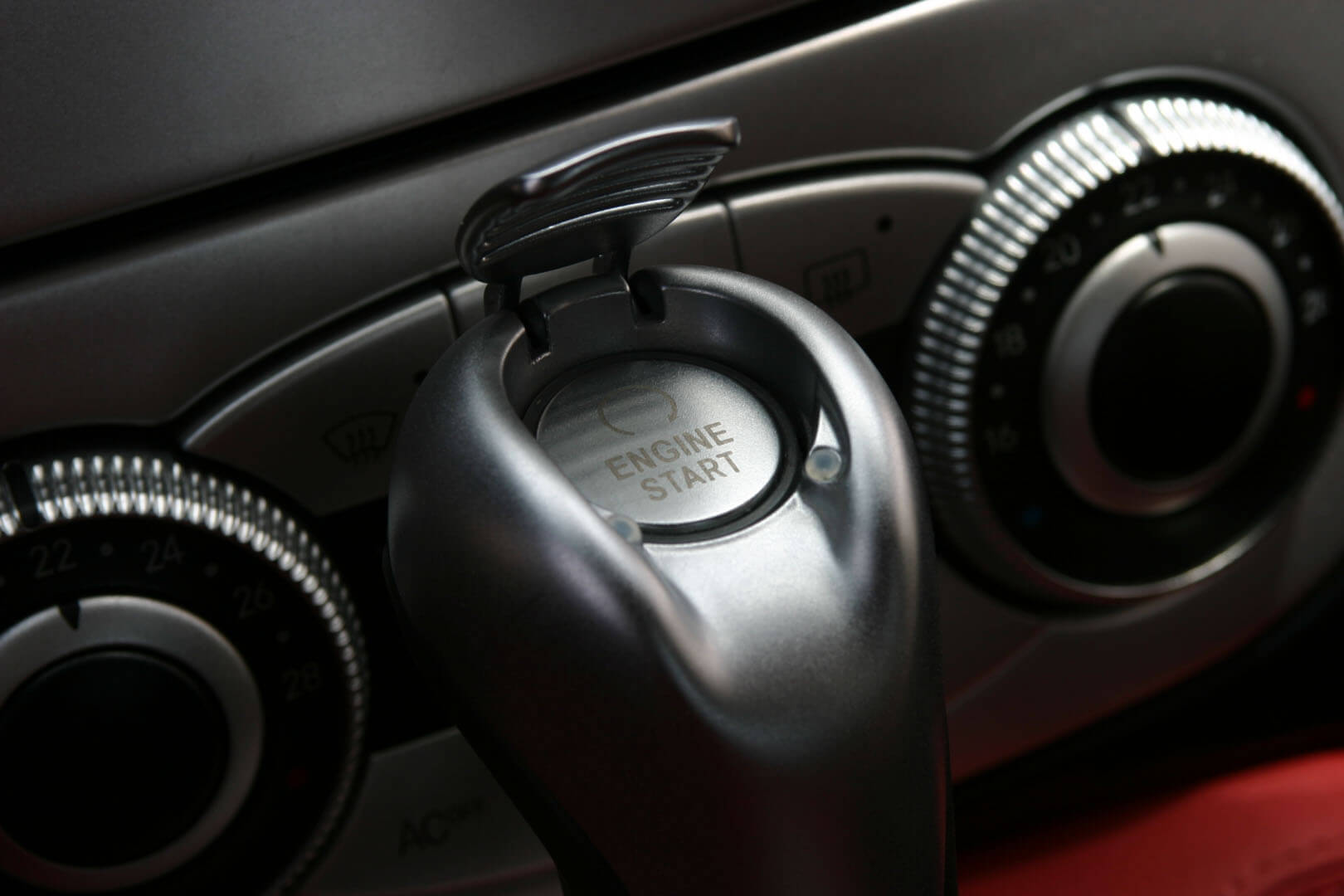 The SLR is relatively heavy (over 1700 kgs) and very powerful, therefore all chassis parts are subject to enormous forces. It is never too docile or too easy to drive, and for the driver to feel safe, the chassis has to be in perfect shape. Look for evidence that bushes and other parts are replaced, and have a specialist check the alignment and the condition of the shock absorbers. Tires must be fresh and of the correct type. The brakes are the imperfect SBC electro-hydraulic system which Mercedes was championing at the time, but with more safeguards and pretty good efficiency. Brake feel, however, is poor, and, especially for low speeds, practice is needed. At high speeds the air brake deploys automatically, nut can be opened manually, please check if this works. 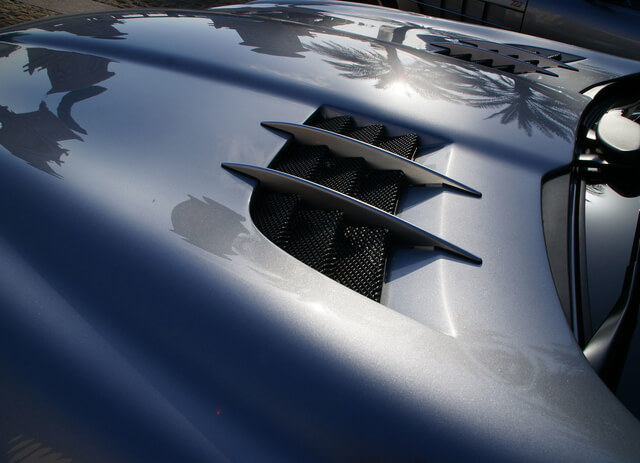 A Mercedes-Benz dealer is able to check the history of the car. If there is evidence of any accident damage at all which was not repaired either at McLaren or via an authorized Mercedes dealer, walk away. This car has a special crash structure in the front of the subframe which absorbs huge impacts, and the rest of the car is made of carbon fiber composites produced in three different processes. Normally the safety cell can save a life in very high-speed accidents, but only if it is in perfect shape. Anything undocumented or suspicious. 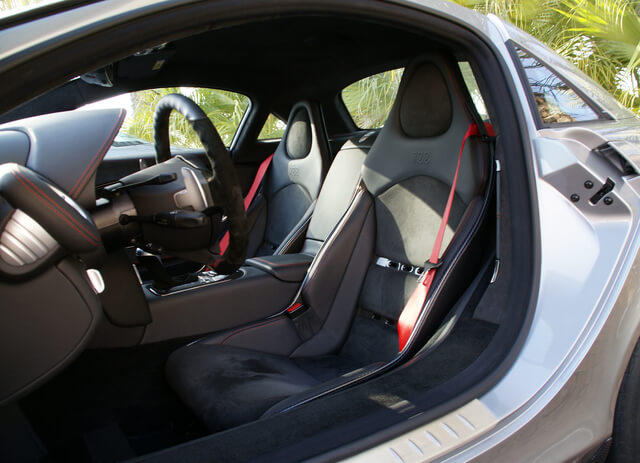 Check the cockpit for damage and to wear to silvery plastic surfaces. Does the condition of the leather match the mileage displayed by the vendor? Check if all the switches work, including the covered starter button (should be backlit in red). 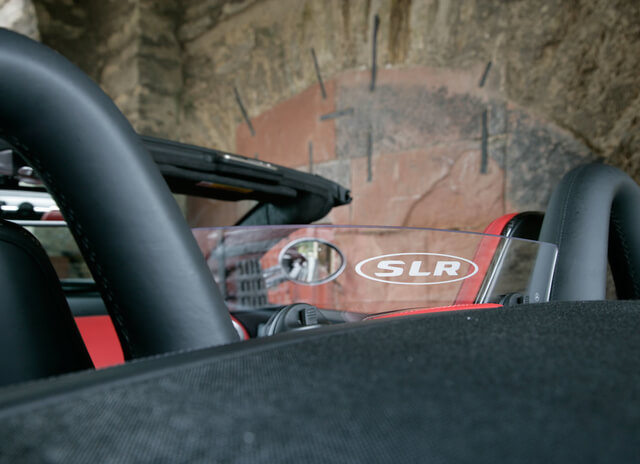 Walk away from anything suspicious. Look for a complete set of documents, including full service records and invoices. The car is much better than whatever you read in any contemporary review, and the 722 Edition is a wonderfully sharp road and track tool, highly recommended.